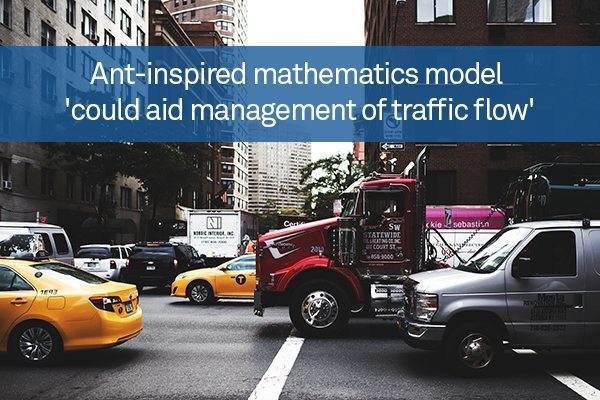 US mathematicians have developed a potentially useful new traffic model by applying mathematical analysis to the movements of ants.

Students from the Harvard John A Paulson School of Engineering and Applied Sciences have used a heuristic technique called ant colony optimisation to find the most efficient time settings for traffic signals on a grid of city streets.

This methodology involves using simulated ants to traverse a graph mapping all possible traffic light cycle combinations on a square grid of city streets. Like real ants, the simulated insects deposit pheromone chemicals on the paths that they take, with a higher concentration of pheromones accumulating around solutions that are more efficient, encouraging more ants to follow the same path and converge on the optimal solution.

The amount of pheromone the ants deposited compared to other ants determined the optimal solutions used in the next round of simulation, allowing the total number of possibilities worthy of further exploration to be gradually reduced. This made processing the large number of possible traffic light settings computationally feasible.

It was found that this ant colony optimisation system led to a seven per cent decrease in mean travel time over the standard baselines used in some cities, simply by ensuring traffic light timing was calibrated for optimum efficiency,

For example rather than timing each green light for a standard 30 seconds, the model indicated that it might be better to have a light display green at one intersection for 20 seconds, while another would stay green for 40 seconds.

With this theoretical model in place, the next step in the research process would be to apply the techniques to real-world city data to see how it works with a dynamic traffic system.

Project co-creator Alex Wang said: “Efficiently controlling traffic light cycles could have major benefits for the public, since people spend more and more time sitting in traffic. Optimisation could reduce wait times at intersections across an entire city, saving time and money for a lot of people.”