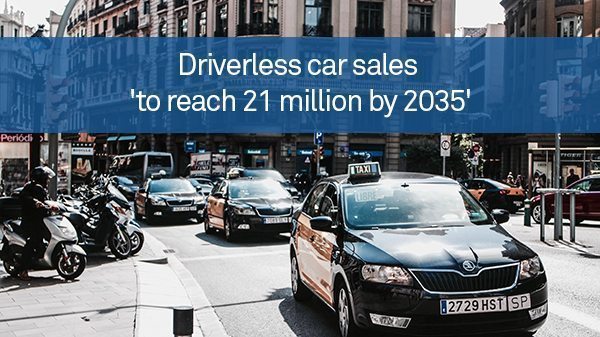 A new report has revised upwards the estimated number of driverless cars that will be sold worldwide by 2035.

The IHS Automotive figures indicate that nearly 21 million autonomous vehicles will be sold globally by 2035 – up from around 600,000 units in 2025, reflecting a 43 percent compound annual growth rate over the course of a decade.

This new forecast is considerably higher than previous estimates, with the revision informed by analysis of recent research and development by automotive manufacturers, suppliers and technology companies investing in this area, as well as a recent wave of developments and investments and activity carried out by various regulatory organisations.

Key trends driving this growth include the emergence of new ride and car sharing programs, increasing investment in autonomy by technology businesses, the establishment of new research and development centres and improved efficiencies expected to impact the further proliferation of automotive technologies.

The US is expected to get ahead of the curve and lead the initial deployment and early adoption of autonomous vehicles, with several thousand sales by 2020, growing to nearly 4.5 million units by 2035.

China will likely adopt the technology more slowly but will eventually become the single largest market for driverless cars, with more than 5.7 million vehicles to be sold. Western Europe will drive demand in the EMEA region, while a cultural affinity for technology will lead to considerable take-up in Japan and South Korea.

“IHS expects entirely new vehicle segments to be created, in addition to traditional vehicles adding autonomous capabilities. Consumers gain new choices in personal mobility to complement mass transit, and these new choices will increasingly use battery electric and other efficient means of propulsion.”