Fewer than 1 in 6 UK firms ‘fully ready’ for BIM 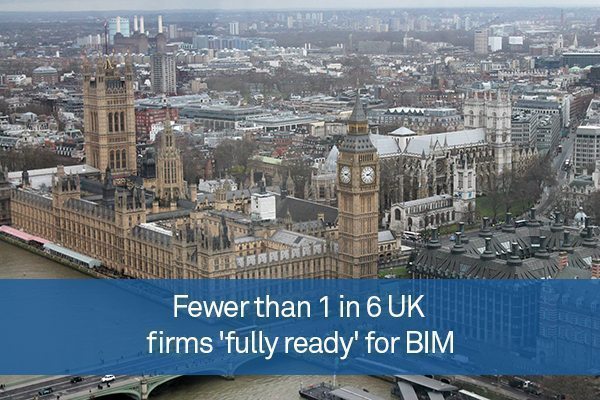 Back in 2011, the UK government set about accelerating the adoption of building information modelling (BIM) in the country’s construction sector. One of its tactics to this end was to stipulate that all government contracts, regardless of size, should be delivered using collaborative 3D BIM within the next half-decade – specifically by the beginning of 2016.

Now, with just a month and a half to go before this deadline, evidence has emerged to suggest that many firms still have a long way to go to be considered “fully ready” for BIM – and that the 20 per cent cost savings identified by the 2011 Government Construction Strategy may still be up for grabs.

According to research carried out by the Electrical Contractors’ Association (ECA) and published last month (October 15th), almost six in ten (57 per cent) of UK firms have yet to complete the adoption of BIM Level 2, while more than one in four (27 per cent) are “not ready at all” for the approaching deadline.

This means that only a handful of firms – one in six, or 16 per cent – can be considered “fully ready” to use BIM in centrally-procured government construction projects, as was mandated in the 2011 strategy.

Commenting on the figures, ECA director of business services Paul Reeve remarked that while BIM readiness is low, awareness is high, indicating that guidance – not education – is needed to deliver on the BIM promise.

to deliver on the BIM promise. “Many contractors, and others associated with our sector, still have a long way to go to be ready for the government’s 2016 BIM deadline,” he said. “The results indicate that while some companies have already engaged successfully with BIM, many more have yet to engage with the aspects that allow effective information sharing with others in their supply chain.”

The ECA’s research comes shortly after a similar study from Pinsent Masons, published in May, in which 71 per cent of construction sector respondents said they believed the industry would not be fully ready for the BIM deadline.

More positively, however, more than half (52 per cent) added that they were seeing more collaboration through the supply chain as a result of the push for greater BIM uptake.