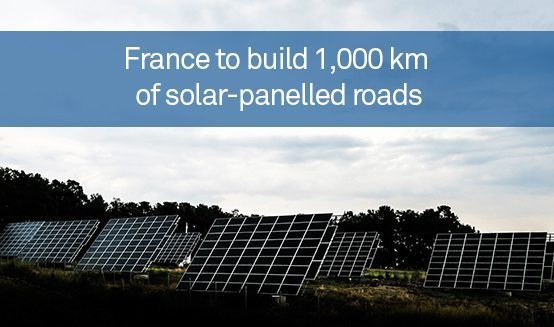 Segolene Royal, minister for ecology and energy, confirmed the plans at a conference of transport authorities at the end of January, Global Construction Review reports.

She added that tenders had been issued and testing would begin in spring using a technology developed by construction company Colas and the National Institute of Solar Energy called Wattway.

Wattway panels are just 7 mm thick and a single 20 sq m installation is enough to power a single home excluding heating, Colas claims. Extend this to a 1 km stretch of highway, and the resultant energy should be sufficient to light up a town of 5,000 people.

“The maximum effect of the programme, if successful, could be to furnish five million people with electricity, or about eight per cent of the French population,” Ms Royal said.

While the budget for the project has not been disclosed, the minister added that a hike in petrol taxes – possible due to the falling cost of oil – could absorb up to €300 million of the cost of this and other infrastructure improvements.

The idea of building solar-panelled roads is nothing new. Back in 2014, for example, a husband-and-wife team in the US successfully raised $2.2 million (€2 million) via crowdfunding platform Indiegogo to commercialise their own patented solar paving technology.

Scott and Julie Brusaw are aiming to see their panels rolled out across the entire country – covering some 80,000-plus sq km of roads – and claim this would easily supply 100 per cent of the US’s energy.

In Europe, meanwhile, Dutch consortium SolaRoad is currently testing a 100 m stretch of solar-panelled highway in Krommerie, and say early results show the technology is performing better than expected.