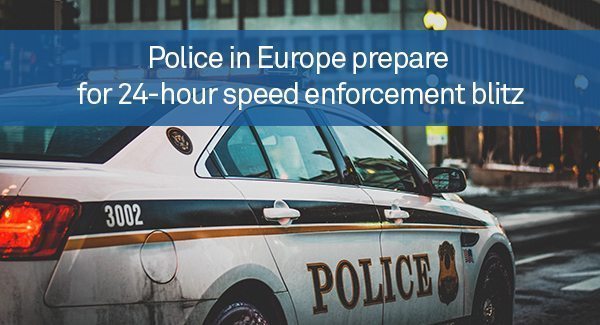 Between tomorrow (April 21st) and Friday, drivers in Europe should expect to see a significant spike in speed enforcement activity across the continent.

As part of the European Traffic Police Network’s (TISPOL’s) weeklong speed enforcement campaign, police officers will be taking part in a so-called “speed enforcement marathon” – a 24-hour blitz against reckless and dangerous driving.

The marathon will run between 06:00 on Thursday and 06:00 on Friday across multiple timezones, and individual forces will be left in charge of the decision whether or not to disclose the locations of their checkpoints – although TISPOL recommends making this information available to the public.

“Our forthcoming speed enforcement activity is all about prevention,” commented the organisation’s president Aiden Reed.

TISPOL wants drivers to “think about the speeds they choose”, he continued, therefore “reducing the risks they face and the risks they pose to other road users”.

“That’s why we encourage participating countries and police forces to publish information about the precise locations of speed checkpoints in advance. We want to get into the heads of drivers, not their purses.”

In the 2015 edition of the speed marathon, Germany alone set up a total of 7,000 checkpoints manned by 13,000 officers. Most locations were specifically requested by the public.

Even Cyprus was involved, with the island country setting up 90 checkpoints on its road network as part of the marathon.