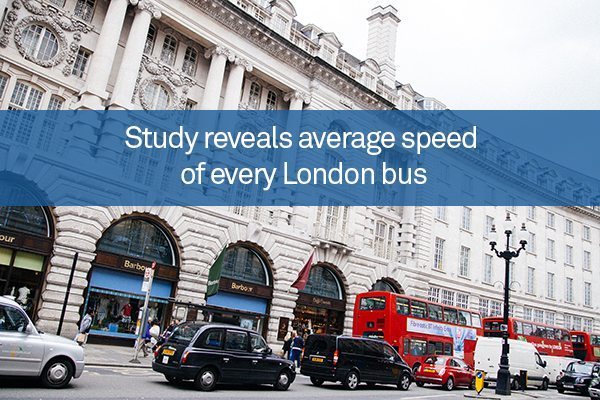 Driving in London can be a slow and frustrating process. For bus passengers, it’s even more so – problems like unexpected waiting times and driver absenteeism only serve to compound the city’s notorious level of congestion.

In order to tackle problems like this, transport planners need the right data at their disposal. Historically, Transport for London (TfL) has used two metrics to measure the performance of its high frequency bus services: excess waiting time, and the distance a bus travels compared to that planned. Now, though, an independent watchdog wants to see a third benchmark added to the equation: the average vehicle speed on each route.

As part of its policy meeting last month (October 20th), London TravelWatch presented a new report containing this very data. Based on intelligence gathered via the iBus technology that tracks every one of the city’s 8,000 buses, the document lists each route against its average speed over a 24-hour period and during morning peak time (07:00 to 10:00 GMT).

It reveals that the 650, which links Emerson Park School in Hornchurch with Cedar Road in Romford, is London’s slowest bus, achieving an average speed of just 5.4 miles per hour. The 11 to Fulham Town Hall and 23 to Liverpool Street Station also fall short of six miles per hour, achieving average speeds of 5.8 and 5.9 over a 24-hour period respectively. At the opposite end of the scale, the 637 to Chinbrook Road manages an impressive 23.1 miles per hour.

Commenting on the figures, London TravelWatch chair Stephen Locke said: “Both reliability and journey time are really important to bus passengers. There are also benefits to TfL in terms of its operational costs if it can get some of the slowest buses to operate just a little faster.

“We will be looking at this data and challenging TfL to bring about improvements.”