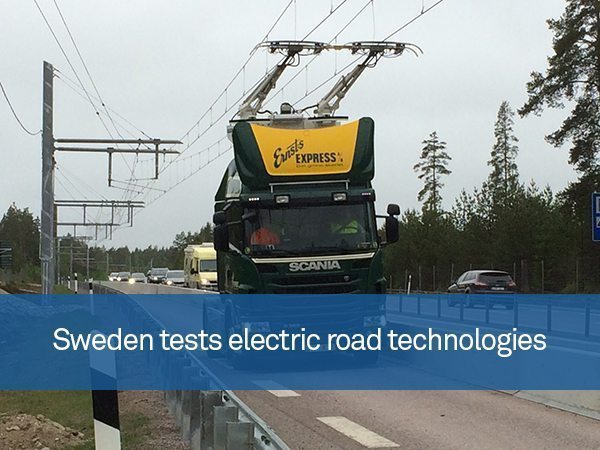 A road in Sweden has become the testing ground for a new technology that could allow electric vehicles to be powered on the move, rather than by relying on batteries.

A two kilometre section of the E16 motorway is being used for the trial, which uses ideas similar to those seen in some rail and tram networks. Contact lines have been suspended 4.5 metres above the roadway, while the truck being used for the test is equipped with a current conductor on the roof that feeds 750 volts DC to the truck’s hybrid electric system.

The current conductor can connect automatically at speeds up to 90 km/h, while other traffic on the road will not be affected by the lines.

Lena Erixon, director general of Trafikverket, commented: “Electric roads will bring us one step closer to fossil fuel-free transports, and has the potential to achieve zero carbon dioxide emissions. This is one way of developing environmentally smart transports in the existing road network. It could be a good supplement to today’s road and rail network.”

The test is the first of its kind in Sweden and will run until 2018, providing knowledge about how electric roads work in practice and whether they are a viable technology for a wider rollout in the future.

It has come about as a result of the Swedish government’s commitment to energy efficiency, and its goal of having a fossil fuel-free fleet of vehicles by 2030.

However, the scheme on the E16 is not the only electric highway solution being tested in the country. Outside Arlanda, the eRoadArlanda consortium company is set to trial a different technology that involves an electric rail in the roadway charging the vehicle during its trip, more akin to the third rail technology seen on some rail networks.

For the time being, this pilot will take place on a closed-off road, but the plan is that the technology will be demonstrated in actual traffic next year.