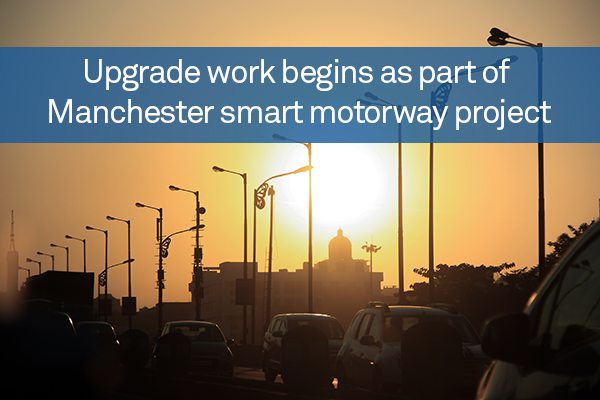 Highways England has announced the commencement of work to upgrade 56 overhead gantries on a 17-mile smart motorway route near Manchester.

The work will take place between junction 8 of the M60 near Sale and junction 20 of the M62 near Rochdale, with four specialist subcontractors utilising cranes, scissor lifts and cherry pickers to remove existing signage and fit new steel support structures, cables, electronic signs and lights to each gantry.

Scheduled for completion in autumn 2017, the smart motorway project will utilise the latest technology to monitor traffic levels and keep vehicles moving using variable speed limits. More than 350 electronic signs will warn drivers of changes to the mandatory speed limit, as well as providing information on lane closures and incidents ahead.

Additionally, the hard shoulder will also be permanently converted into an extra lane between junctions 18 and 20 on the M62, in order to increase capacity on the route between Greater Manchester and West Yorkshire.

Work will be carried out overnight when traffic levels are at their lowest, with certain short stretches of the motorway closing during most nights from Monday to Friday over the next 11 months.

The first of these closures will take place over six nights, excluding Saturday and Sunday night, on the eastbound M62 between junction 18 at the interchange with the M60 and M62 and junction 19. The closures will extend from 22:00 to 06:00, with diversions in place.

Highways England project manager Stef Wilson said: “Over 180,000 drivers travel along this stretch of the M60 and M62 every day, making it one of the busiest routes in the country.

“The new smart motorway will use variable speed limits to help tackle the stop-start conditions many of us have experienced in the past, and an extra lane will be created on a five-mile stretch of the M62.”