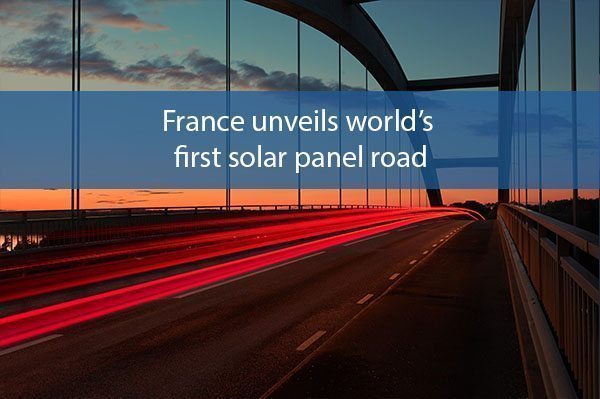 A village in northern France has become home to what is said to be the world’s first solar panel road, after a 1 km stretch of highway was opened earlier this month.

The route, in the village of Tourouvre-au-Perche, is covered with 2,800 square metres of solar panels and will be trialled for two years to determine whether it can generate enough electricity to power street lighting in the community, which has 3,400 residents.

Around 2,000 vehicles a day are expected to travel over the panels, which have been covered with a resin containing five sheets of silicon in order to make them strong enough to withstand the stresses put on them by all traffic, including heavy goods vehicles.

The road was opened by ecology minister Segolene Royal, who said she would like to see such solar panels installed on one in every 1,000 km of highway in the country, which has around 1 million km of roads.

However, some critics have questioned the effectiveness and cost of the technology. Solar panels laid on flat surfaces are known to be less efficient than those placed at an angle, which allows them to more effectively absorb the sun’s rays.

The location of the trial has also raised concerns, as Normandy’s capital Caen sees just 44 days of strong sunshine a year, compared with 170 in Marseille in the south of the country.

While the French project is the first public road to use the technology, it has been trialled before in the Netherlands, where a solar panel-equipped cycle path has been in operation since 2014. This has generated 3,000 kWh of electricity – enough to power a typical family home for a year. However, the Guardian points out that the cost of building the path could have paid for 520,000 kWh.

Marc Jedliczka, vice-president of the Network for Energetic Transition, told Le Monde: “It’s without doubt a technical advance, but in order to develop renewables there are other priorities than a gadget of which we are more certain that it’s very expensive than the fact it works.”

The constructor of the road, Colas, has said it hopes to reduce the cost of producing the necessary solar panels, and it already has orders for 100 similar projects, half of which are in France.